NEWS, REVIEWS, ETC...
Violence is a frequent and foreseeable solution...

If you are like me, you are already sick of the retards proclaiming "violence is never the answer." The fact is that violence is a frequent and foreseeable solution the Founding Fathers anticipated. So foreseeable is violence as a solution, the Founders established, instituted, and trained  individuals sworn to "defend the Constitution against all enemies both foreign and domestic". These trainees can often be heard chanting "Kill, Kill, Kill without mercy!" That institution is the US military and 3% of the US population have sworn this oath.

​While many might believe that a soldier job is to preform acts of violence against; women, children, journalists, and civilians in far away lands for little money; The fact is the are employed and trained by "the people" to 'defend the US Constitution' with violence when needed.

​The Constitution needs defending. Passively ignoring those who openly laugh at the Constitution, violate it's requirements, and deprive individuals of their rights can no longer be tolerated.  Cowardice is not the solution when the nations foundation  is under open attack.


To be clear, defending the US Constitution sometimes requires violence against it's domestic enemies as well as it's foreign ones.  So make note of 'leaders' who would spew propaganda and lies to strip us of our Constitutionally guaranteed rights. Make note of  unlawful dictates, and ridiculous calls for passivity these 'leaders' employ against us. These 'leaders' are the enemy and they must be removed with extreme prejudice if the US Constitution is to  endure.
​

"OregonGov. Kate Brown announced Nov. 13 a two-week "freeze" for the state that will take effect starting Nov. 18. Restaurants and bars will have to go back to take-out service only — previously they were allowed to have limited indoor seating — and indoor recreation centers like gyms, museums and theaters will close again, as will zoos and gardens. Grocery stores will be limited to 75% capacity, and Brown is encouraging curbside pickup when possible." USA TODAY

Mandates are legal (free speech and all); but penalties for violating mandates are unconstitutional unless passed by the legislature.

To sidestep the  unconstitutionality issues in places like Reedsport, Chiefs turn to 'disorderly conduct laws' to impose these fascist decrees. All that is required is three tory loyalists to create a scene and complain about an individual's non-compliance to an ignorant/sympatric law enforcement officer. If the individual refuses to conform or questions the "law" , individuals are threatened/arrested for disorderly conduct.

Bicentennial Park sign tagged.
The sign, donated by REEDSPORT.COM a few years ago to mark the location of Reedsport's newly installed 9 hole disc golf course, was tagged with spray paint on or about Oct 2nd and will be removed. The sign had been this hidden gem's only marker. A speed sign near 22nd and Greenwood was also damaged.

The September Reedsport City Council meeting was held early due to the Labor Day Holiday. Mask and social distancing protocols were followed, and made for a capacity crowd while still granting a forum for all who wished to be heard. The comment period of the meeting was focused on police activity in the area of 19th St in uptown Reedsport. Most supported and praised the Departments' activity; but opposition to police overreach, clashed with the will of the masses, and resulted in at least one individual storming out after many interruptions.
The mayor then took an opportunity to  proclaim citizens should inventory their belongings and speak with an insurance agent.
First item on the agenda, and sole reason for my attendance, concerned solid waste management agreements. The issue was tabled for a month, so I left... 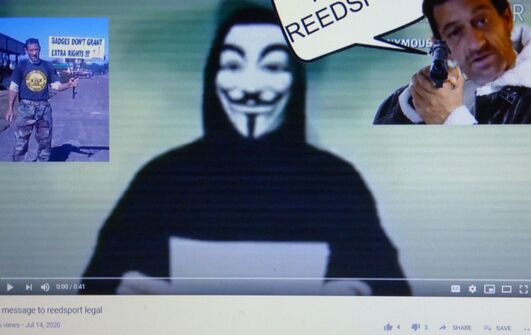 ​Harassment or Free Speech?
On July 13th individual(s) claiming to represent the Masonic Temple and downtown Reedsport posted a YouTube video (click link) advising 'Reedsport Legal' to "get out of town", informing him his platform was going to be taken down, proclaiming a recently deceased Reedsport resident a 'democrat', and encouraging factual correctness*.
While no individual was named in the clip,  photo-shopped images of activist and part-time legal counsel in Reedsport's non-court of record,  Denny Swartz, were prominently displayed over a copyrighted video with audio of distorted and perhaps unlawful speech added.
Shortly after this story was published the original video was removed, but a 2nd generation is available to view at https://www.youtube.com/watch?v=ECReuMbvjZI.
While this video doesn't seem to violate any Oregon State laws, it does look like it might violate Title 10 Section 875 paragraph (d) of US Federal Law which is punishable by fine and imprisonment for up to 2 years. Additional 'fair use' and other copyright laws were likely violated and can result in up to 180 days of imprisonment and fines.
Representatives of downtown Reedsport and the Masons have neither denied involvement, nor condemned the act.
​
​​*Friends of the deceased knew him to be a Ron Paul Republican.
​​ 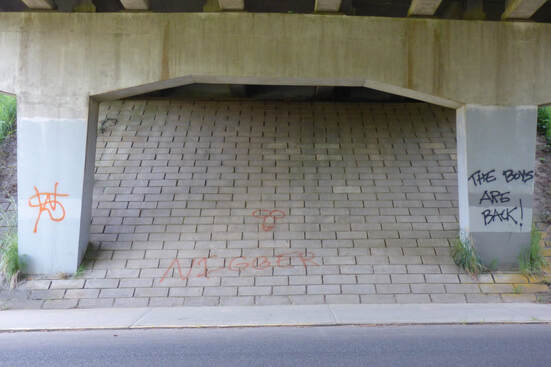 Racism on Reedsport's Ranch Road
Vandals tagged the Hwy 101 underpass at Ranch road on the night of the May 8th. ODOT has been notified and a case for criminal mischief has been opened.
​

Sometime in the last few days a 'care package' of sorts was dropped in Bi-Centennial Park, off of 22nd St in Reedsport. Why this collection of refuse was placed in this City park is a mystery. The trash doesn't seem to have  any connection to the park prior to it's placement.
Keeping in mind that Oregon has the most liberal free speech rights in the U.S., the State of Oregon says this 'expression' violates ORS 164.805 by 'detracting from the natural cleanliness of property'; which is a class C misdemeanor punishable with up to 30 days in jail and/or up to a $1250 fine. More importantly, it also violates ORS 164.775 'discarding rubbish within 100 yards of waters of the state'; which is a class B misdemeanor punishable by up to six months in jail and/or up to a $2500 fine.
An attempt to contact the City regarding the matter was unsuccessful.
​     A nearby resident suspects kids. 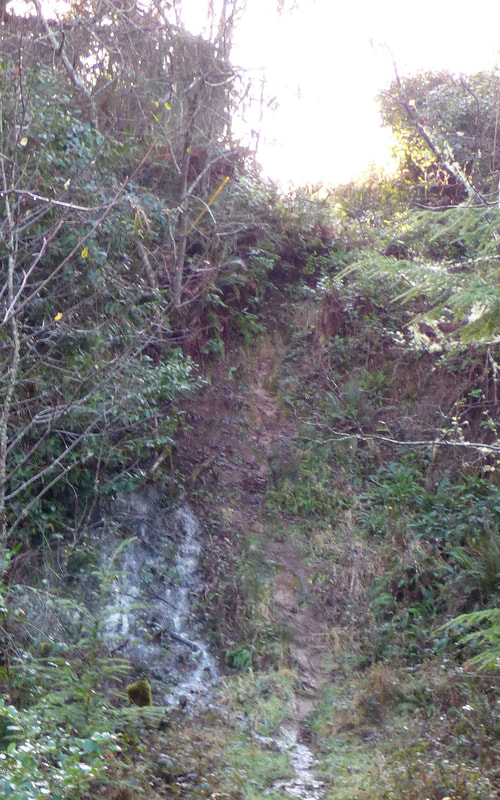 Leakage at end of Frontage Court was sewage.
Jan 3rd 2020
What was first attributed to storm water runoff now appears to be sewage pouring into Bi-Centennial park and will definitely effect the Providence Creek fish run. Attempts to alert the City of Reedsport had been unsuccessful.  The issue is at least on it's third day. The event can be seen from the main entrance off 22nd in the dip.
Reedsport Public Works personnel were on site and aware of the situation at approximately 11:30 this Friday morning, and began bringing in equipment to address the problem. Workers had "no comment" according to bystanders, and appeared to still be assessing the situation.
Warning signs posted in the park advise to avoid contact with the spillage and to contact 541-271-4313 for more information.
A around 15:30 22nd St was closed between Greenwood and Ridgeway as repairs continue. Pipe is being laid from Bicentennial Park's pump house to approximately 20th and Greenwood.
At approximately 13:30 Saturday afternoon Reedsport Public Works workers had reached a stopping point and reopened 22nd street through the dip.
For the past few years three species of salmonid have been documented spawning in the park's creek during the months of January and February, some approaching 24" in length. Check back for updates... 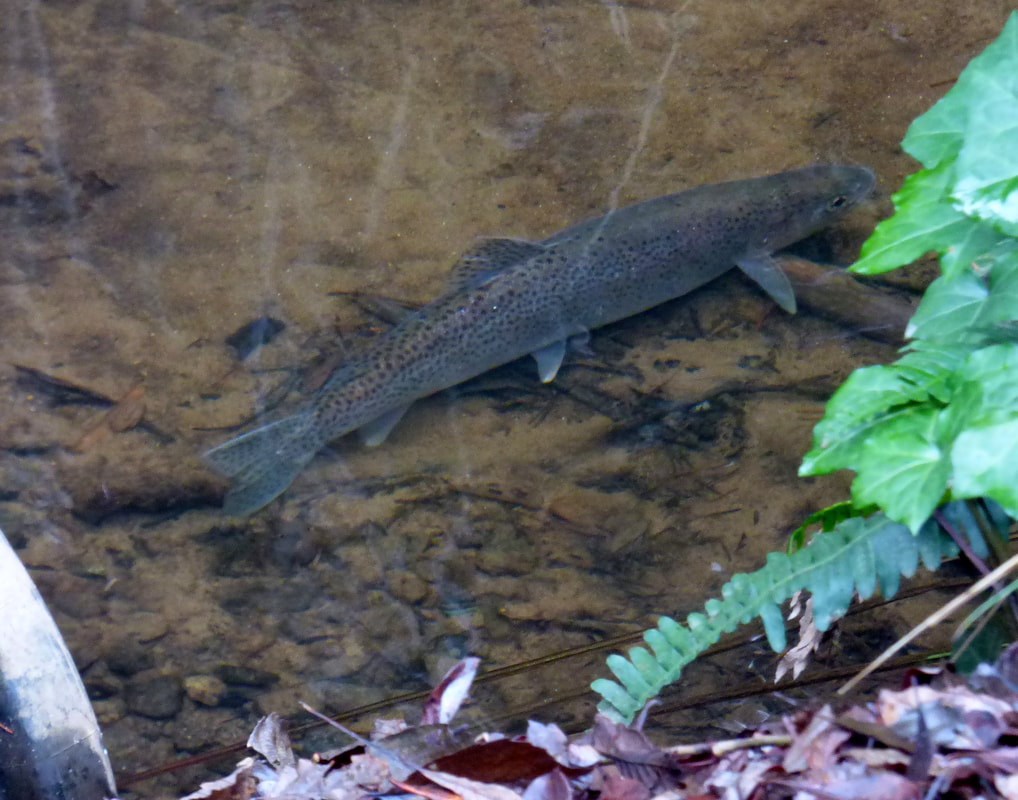 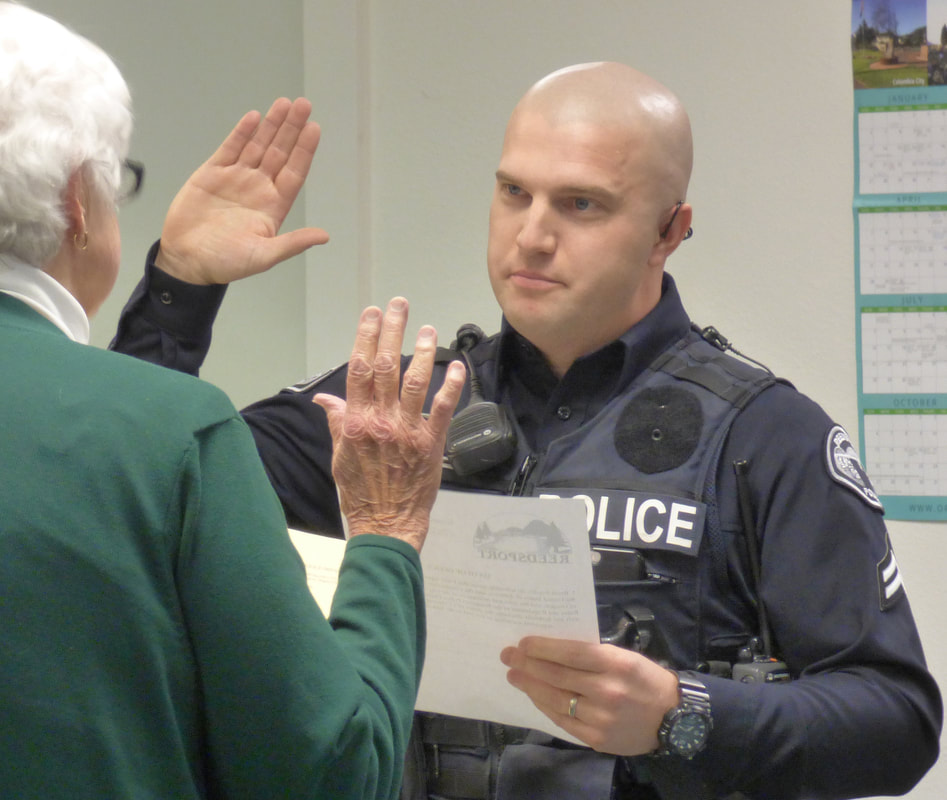 ​Police Corporal Brent Snyder was sworn in by
the Mayor during the November Reedsport City Council meeting.
Approximately five dozen citizens crowded the Council Chambers to see Police Corporal Brent Snyder sworn in and pinned. Corporal Snyder is Chief Matt Smart's first hire as Chief of Police; but not the last Snyder He intends to place on the City's force.
Following the ceremony a few dozen remained for an Abatement Hearing. The City Manager appeared well prepared and City Attorney Steve Miller stayed busy serving opposing Council a plethora of evidence as to her client's responsibility. A viable defense seemed unlikely, so I left...
Following my departure, the Council discussed: outsourcing utility billing, designating the alley between 19th and 20th as ONE WAY, and a Community Training Program.
​

Following the heavy congestion of the Labor Day weekend and related calls to the City, the best portion of the meeting was spent with representatives of  ODOT  deflecting complaints, running interference, and explaining decisions regarding the Highway construction taking place on Highways 38 and 101.
The high congestion recently experienced is expected to decrease now that summer has ended and while the reduction from four lanes to three in uptown Reedsport will cause traffic to back up to Winchester Bay from time to time, that was also the case before the reduction. Most of changes are safety related and expected to reduce serious accidents along the highways as they pass through Reedsport.
Citizens are reminded that the Final Pedestrian Safety Study, which was part of the basis of these changes, is available on-line from the City's website.  https://www.cityofreedsport.org/index.asp?Type=B_BASIC&SEC={18514399-9C10-43B5-872C-B6050D241877}&DE={31444F77-849F-4848-B614-F63CDBF72F18}
Once the construction in uptown is completed the issues at the intersection of 22nd and Hwy 101 will be resolved as well as the problems of entering Hwy 101 from: 18th, 20th, and 21th. Residents are reminded that there are traffic lights at 19th that may make travel quicker in the meantime.

During the Citizen Comments portion of the meeting, resident attorney general Dennis Swartz addressed the Council with his concerns about how proper procedure was not followed in the hiring of Matt Smart as Chief of Police.

Port Commission Vacancy
August 2019
The Port of Umpqua is seeking applicants to fill a vacancy on the Port’s Board of Commissioners.

This is a volunteer position, appointees will not receive compensation.
To be eligible for appointment, applicant: For more information contact the Port of Umpqua Office at 1877 Winchester Ave., Reedsport. Phone 541-271-2232 or get an on-line application at http://portofumpqua.net/wp-content/uploads/2019/07/Application-Port-Commission-071920-1.pdf.

Highlights of the July 1st Reedsport City Council meeting.
Approximately two dozen citizens attended the swearing in ceremony of the Interim Police Cheif Robert Gross at the Monday night meeting. Prior to the new Chief taking his oath, which was performed by City attorney Steve Miller,  the new Public Works Director  was available for a meet and greet. During the Public comments portion of the meeting, a representative citizens living on Winchester Ave complained about speeding and asked that the City's speed monitor be placed near 10th street during the week of Dune Fest. Local Counsel Denny Swartz served the Councilmembers with  documents regarding: the Constitutional "right to counsel" being denied in Municipal court, the right to record public officials, and a list of 10 Maxims of Commerce.


Highlights of the June 3rd Reedsport City Council meeting.
Approximately 55 people attended the Monday night meeting. Most were there in support of a local business striped of it's license in April when a local resident complained about the leaf featured on a sign which could be seen in the window. Citizens from as far away as Bandon spoke in support of "free speech" in advertising regarding this issue, others  pointed out the violation of 'due process' in revoking the business's license,  while other showed concern with the effects on the other four or five similar shop now open or planning to open soon. One Woman asked the council to "Keep the city Reedsport, not Weedsport".  Other concerns brought up included the poor water quality for the second Memorial Day weekend in a row, and police behavior.
James Graham from the 2020 census gave a presentation concerning the upcoming population count. Points of interest included Reedsports 25% housing vacancy, the negative economic effects  the city may face if the population drops below 2000 residents, and that a population of over 3000 would have more positive economic effects. Hiring for the 2020 census is beginning and local are needed for $14 plus and hour jobs. Apply on-line at 2020census.gov/jobs.